Joker is a 2019 American psychological thriller film directed and produced by Todd Phillips, who co-wrote the screenplay with Scott Silver. The film, based on DC Comics characters, stars Joaquin Phoenix as the Joker and provides a possible origin story for the character.

The font used in the Joker logo has been recreated as Gothic Joker by KELGE Fonts. The font is licenced as free for personal use. 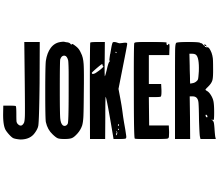